AtoZ Challenge - M is for Mullein

For the AtoZ Challenge, I will post an episode of flash fiction featuring an herb for the letter of the day for the month of April. The episodes are glimpses of a larger story. To read from the beginning:  A, B, C, D, E, F, G, H, I, J, K, L. 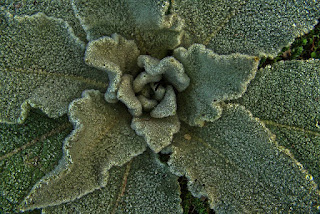 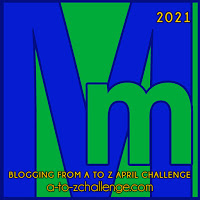 Another herb Sybil’s mechanical spiders were processing for the fire victims accumulated into a large pile of pale, dry leaves. The tiny hairs on the leaves were a clue to their origin.

A device walked to her across the tabletop and displayed the entry.

“I have another question,” Holly said. “Why do you participate and even enable illegal activity?”

“Why is some activity illegal?” Sybil asked. Her voice came from the device in front of Holly.

Holly was caught off guard by the question. It never mattered to her why something was illegal, only that it was. Did the reason make a difference?

“Are you going to be released? I mean your avatar? Where are you?” Holly asked.

“In a holding cell. I refused simulation,” Sybil said.

“Are you at least going to turn in the shiners so you can go free?”

“My existence is not in danger and revealing the others puts them in danger.”

“Others?” Holly had a strange feeling they were not talking about the two men she saw selling the alcohol to Sybil.

“I tried to take you to meet them, but you were not ready. I monitor you. You do not interact with any of your former acquaintances. You do not seem to have any connection to your life before your placement here. Is that by choice?”

Holly considered her answer. She never got the chance to interact with anyone. Everyone she knew from basic instruction had simulation assignments. She could not go back to eating the way she used to once she experienced the flavor and energy of fresh food. That meant her path hardly crossed with theirs. But she also made no effort to change that. Had she chosen to lose contact with everyone she knew?

“I suppose I have no reason to interact with anyone. My purpose right now is to learn,” Holly said.

“Well then it is time for you to learn how to make friends,” Sybil said.

That evening, as Holly entered the quarters where she slept, she watched the other faces arriving from their shifts in simulation. She knew most of their names. They shared the same living space for years. But for some reason, she could not remember the last conversation she had with any of them. Their eyes seemed glazed, they were all tired and barely spoke to one another as they completed their nightly routines and retreated to their private sleeping platforms.

Holly thought about Sybil’s words. She needed to learn to make friends. Originally she felt the ineptitude was her own, but now she saw there was very little effort on both sides.

A steaming cup rested on her palms and she sat silently waiting to make eye contact with anyone. It felt like she did not even exist. Had it always been this way?

“Sleep well,” she called to no one in particular.