In the wise words of Britney Spears, "I did it again."
I started the novel over...again. But I'm still not sure if I will be abandoning the 230 pages I have already written this year, or if I will be incorporating most of that in my new revision.
I swear it wasn't my fault. I decided to take a break from the novel since I was not 100% sure where I wanted to go next in the plot. While on that break I wrote a few short stories --one of which was a prequel to the novel. Now that I have read (written) what happens in the galaxy before my novel occurs, it changes everything! (Not everything, that was a little melodramatic.) But one of my major subplots no longer makes sense.
The truth is, it needed to be done anyway. This is the difference between writing for my own pleasure and fully plotting a story for the pleasure of others. Face it, we all cut corners when no one is looking, and that is what I was doing. I was only writing the subplots that I enjoyed, the ones that made me feel happy and excited. But that is not life.
When I used to teach problem and solution in story telling, I always used Cinderella as an example. No one would care about Cinderella if her stepmother hadn't been such a cranky old bat with a royalty complex. When I look at my own original plot from four years ago, and the revised plot from this year, they both have plenty of conflict. But perhaps it is not the right kind of conflict, or the depth. Cinderella wasn't just a poor girl who had no shot at going to the ball, she was basically a house slave, who was tortured from childhood. The woman who was supposed to be her mother, was more like a prison warden. Her father died suddenly, and she was completely abandoned. When she finally thought she had a chance, it was crushed and shredded by her own family. It didn't stop there, she was pushed down, time and again. Every hope was extinguished. She worked hard and deserved to be rewarded. Why did all of this happen to her? We don't know. Did she deserve any of it? I think that good stories don't answer that question. That is what makes the characters relatable --they have to deal with reality just like us.
One of my very young coworkers asked me today if I believed in Karma. I quickly said, "Yes," without even thinking about it. But honestly, I haven't believed in Karma for a long time. I used to think that if I was a good person, good things would happen to me. But that is a very naive thing to believe, and I didn't have the heart to say it out loud. "I'm too old to believe in Karma," is what I should have said.
If you have not read the book "The Lost Horse," by Ed Young, you should go look at it. It is a children's book that has been translated from an Ancient Chinese tale. To summarize, a man has a really awesome horse, that one day runs away. Everyone thinks it is so awful, except the man, who says, "It might not be a bad thing." Then the next week the horse returns with another horse, so now he has two. Everyone is excited, except the man who says, "It might not be a good thing." A few days later, the man's son falls off the new horse and breaks his arm. The story continues like this with everyone assuming an event is bad or good, and the man refusing to pick an adjective. I like the man in the story, and he is the reason Karma is not real to me. All events are just that --events. Nothing defines them as good or bad except our own perception. Although all events in our lives are connected, they are not necessarily directly linked by cause and effect, and certainly not by a tally of what is deserved.
It is time to give my characters some flaws and send them into a realistic world where they can't rely on Karma.
Remind me some day to tell you the story about the time Buddha was our chef at a hibachi restaurant in Arkansas and convinced my husband and me to have a second child.
Posted by Steph W. at 6:48 PM 2 comments:

It finally hit me this morning as I was doing my hundred and twenty-seventh downward dog in the past two weeks. All those years of trying to meditate taught me that I was a writer. 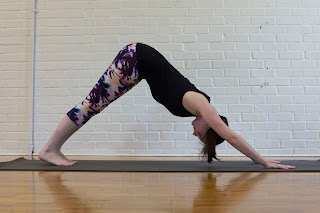 Let me back up a little. My headaches had returned. The kind that you feel from your fingertips all the way to the temple. You can't turn your head, smells feel like they are tiny fighter jets that come in and use rapid fire to attack your brain stem, and even the most well meaning child becomes a creature to be feared. The room spins, the lights are hot, and no one else understands why you are angry all the time.
I've blamed gluten, sugar, stress, sitting, typing, you name it. There is generally some truth to all of this, but if I really wanted to cure the ailment at the source, I had to fix the muscles in my shoulders. That means the gluten and sugar need to stay at a minimum and the sitting and typing needs to be countered by a stretching routine. The stress...well there is not much I can do about that. I can't get rid of my job or my children. For whatever reason, our society frowns on that.
So the muscles. I'm not in a position to pay someone to fix them, and the world's best message therapist is a thousand miles away (miss you Jessica)! The only thing I could do was try to massage it myself. After more than a month of failed attempts, I decided I needed a yoga routine.
Fast forward. I have been doing yoga every morning as soon as I wake up. I started with just laying on my back and lifting my arms over my head and back down to my side. Do that a few dozen times and things start to pop and loosen. Each day I've slowly added more and more. It isn't perfect. There are cats and children constantly interrupting. Have you ever tried to yell while in child's pose? It definitely helps you understand how your neck muscles turn into lumps of concrete. And this morning I got stuck in "thread the needle" because a toddler was standing on my hair and giggling. But the shoulders feel more like joints now, instead of giant knots.
Back to that downward dog. My feet were pressed back, my hips pushing up, and my head was hanging between my shoulders. I felt my chest and shoulders opening. I reached back through the past decade of meditation and yoga practice and realized that the same determination I have put into ridding my body of the constant pain, is the same determination I have been putting into my writing. It is what drove me to join the writing support group, what drove me to seek social media groups for writers, and what allowed me to discover my new beta reading group (a small group of a dozen teachers who have been invaluable in helping me polish my recent short stories). I know that if I stop my practice, everything will eventually fall back. The muscles will tighten and harden, my posture will suffer, and my headaches will return. If I stop following these groups, and writing my blog then the writing will stop too. This sounds depressing, but it is life. If we stop doing, we stop being. For real, stop breathing, eating, drinking, and see what happens. But there is something even deeper than this.
When I first started meditating (almost twelve years ago now) I remember learning about the "monkey mind." The goal is to focus on the breath and let all thoughts drift out of the mind. The "monkey mind" is the string of thoughts that tries to push our minds into a game of hopscotch from one thought to the next. It creates stories that distract us from the present moment. But what an incredible thing! That constant battle with my inner stories is a gift! While it makes meditation an utter challenge, it shows me who I truly am. I am a storyteller. I will never turn it off, not in my deepest moments of mindfulness. I can let them drift through me, but they will never be gone. And that is okay.
I have finally found that peace I was looking for. The stories are allowed to flow and drift, I just need my fingers to catch them and give them form on the screen. What better way to empty a vessel than to find another one to catch the contents?
Thank you for being my vessel! Namaste
Posted by Steph W. at 11:15 PM 2 comments: 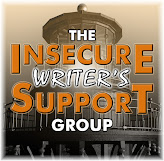 The first Wednesday comes fast this month, so for the first time, I'm not prepared the week before! Life has been kind of crazy in my world. May and June are full for my little family with two birthdays, Mother's Day, Father's Day, and our wedding anniversary. In addition there is Summer Solstice and plenty of other things to celebrate and it is all quickly followed by Independence Day. Lots of grilling, package deliveries, and baking.
This month, the theme for our blog hop is regarding the industry. I am to discuss the changes I would like to see in the next decade. As I know minimal about the industry, I am not even sure what I would want to change. As always if you want to visit the blogs of other writers, please click on the badge at the top of this post for a list of links.
Since I am not very knowledgeable, I want to use this post to mention a few ignorant questions and/or desires in hopes that some of my more knowledgeable IWSG friends can guide me.
My first question is about writing coaches. If you have used one, tell me the best and worst part of your experience. Did the coach help you navigate the industry, or just help you stay on routine and answer personalized questions about writing?
Question two, if you write short stories, how did you market them? Did you use an agent, send them to online venues, or self-publish?
Third, it would be awesome if there was a professional reader site. A person would request an account and review a set of standard works. Their reviews would be critiqued before allowing them to have an account. Once the person is accepted as a reader, they can choose from a database of "pre-published" works and leave feedback for the author. The author can then leave a rating for the reader to ensure that the feedback is valuable. Does this exist, or did I just come up with my own business idea?
Lastly, the industry would issue small time control devices to working writers so they could split their days and spend one timeline sleeping at night, then directly after that, travel back to bedtime and spend the night writing without interruption. This really would be the best improvement upon the industry in my humble opinion.
It's 6:40. The husband left for work, the kids are still asleep, by some small miracle, and I have an hour and a half before I leave for work. It is time for my cup of tea! Have a great day!
Posted by Steph W. at 6:45 AM 16 comments: