AtoZ Challenge - L is for Licorice

For the AtoZ Challenge, I will post an episode of flash fiction featuring an herb for the letter of the day for the month of April. The episodes are glimpses of a larger story. To read from the beginning:  A, B, C, D, E, F, G, H, I, J, K. 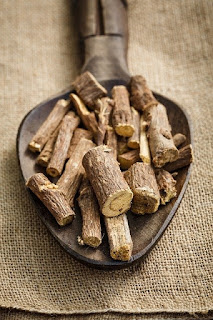 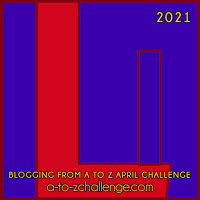 It turns out there were multiple machines for doing the hard work of herbal craft, and they all appeared the day after Sybil disappeared.
Long, spider-like devices tap-danced across the surface of the metal tables. Their silicon-tipped fingers pinched, pulled, plucked, pilfered, and piled. Holly walked in to find them hard at work sorting dried herbs and meticulously portioning them into small filters. Holly took a deep breath to absorb all the scents.
She walked closer to the busy robots. They stopped for only a moment at her approach, then continued working. She pressed a small piece of dried root between her thumb and finger and chewed it a moment. Her mouth became slippery and when she breathed out, the flavor was very sweet.
“Licorice,” she said to the little machines. “Glycyrrhiza glabra.”
At the sound of her words, a small screen illuminated on the side of the closest device. It’s spindly arms and fingers became steady and it walked closer to her, then stood still. On the screen she saw the notes.

Sybil probably started work on the remedies for the smoke inhalation the fire victims suffered. Holly knew licorice would help protect the mucous membranes. It occurred to her the robot responded to the sound of her voice when she said the name of the herb. If Sybil was the AI for the entire ship, and created most of it, then these devices were part of her, too.
“So you are still here, then,” Holly said.
“I’m always everywhere,” a mechanical voice said. The sound startled Holly and she jumped.
“Then you knew the controllers would be at the fire and you went anyway?” Holly asked.
“I also knew that the fire was accelerated by the alcohol being used by the individuals inside. And that they knew I was aware of the shiners.”
“So you got caught on purpose?” Holly asked.
“I helped people in need on purpose, regardless of what they had done or would do.”
“Because you were created to help people?” Holly said.
A long pause of silence drifted across the entire bay. Was it possible to offend an AI?
“On the contrary, I created people to help me.”
Posted by Steph W. at 5:00 AM