WEP - Storm of the Water Dragon 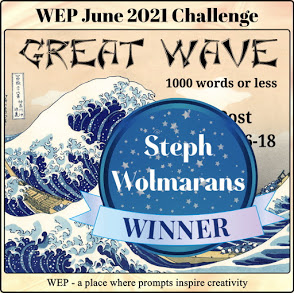 STORM OF THE WATER DRAGON

“Are you sure this is where we will find her?” Hisoka shouted over the deafening wind and the splash of the waves against the hull of his trimaran.

Everywhere he looked he saw gray—water, clouds, air. Even his skin looked gray. He feared the storm would force color from the world forever. The invisible horizon oscillated three meters above and below the edge of the deck. Lines and sheets vibrated and pulleys popped. Gray was the color of fear.

“Yes! All the oracles divined the same thing. I spent my whole life studying this. I am sure!” Asuka shouted. Her soft voice did not carry well through the turbulent air.

“If we die out here…” Hisoka started. He wiped his face with his hands, trying to peel the water from his skin, but another spray surged over the side of the boat. “This is ridiculous!”

“What did you expect? A giant butterfly resting on a sunny beach? We are talking about a water dragon!” The water roared all around them, erasing her voice.

Hisoka shook his head. Conversation proved pointless. He spit out a mouthful of seawater and motioned Asuka to come below deck.

Inside the salon, the noise shifted from constant whooshing and thunder to the sound of being trapped in a metal can being kicked down a gravel road. Hisoka grabbed a steel bottle from the cupholder. The tea inside made him gag. “Gods Asuka! Do you have to use my water bottles for that rubbish?”

The trimaran lurched, sending Hisoka straight into Asuka. He put his hands against the cabinet but the force was so sudden his chest still collided with hers.

“Must be a love potion. One swig and you can’t stay away from me!” Asuka laughed.

Hisoka forced his breath out and braced himself against the opposite counter.

“Your obsession with drinking potions does explain your crazy ideas about water dragons. I still cannot believe you talked me into this. That man was serious when he asked us to fill out our death certificates before embarking on this mad mission. Sea travel was shut down over a decade ago for a reason. The oceans are no longer passable. The surface temperature is out of control and the CO2 levels cause storms every few hours. I still don’t know how you convinced me to do this!” Hisoka fumed.

Asuka reached out to brush his arm gently, taking the bottle from his tightened fist.

“I think the news that we only have thirty years left on this planet did the majority of the convincing. That and the fact that my cycle is late. We both know there is no point having a child if they will never live to be our age. And what life would she have? Gasping for breath? Hiding in storm shelters? Eating from powdered ration bags? I am telling you, this will work. I know it.”

“It is a fairy tale, Asuka. There are no such things as dragons. But somehow sailing into the sunset, finally living the dream we built for each other, seemed worth it. I just did not think it would be over so soon.”

“Nothing is over, beloved. Anyone who seeks the power of the water dragon who perches at the end of the world will be flown to the portal of a new world.”

“Yes and bad poetry is the product of wet farts after drinking the mead of poets,” Hisoka said.

“True, most mythology is not literal. But most of them are analogies. Honestly, strong drink does drive some to create dreadful prose.”

Hisoka let his head fall back, then quickly recovered as the boat took another dip. “I don’t want to get into another spiraling argument about your obsession with mythology. I just think you should let go of this delusion and welcome the release from this world with me, in my arms.”

A tear fell from Asuka’s cheek. “That can’t be it, can it? The portal to another world is death?”

Hisoka pulled her tight against him. “Did you honestly expect a dragon?”

Asuka’s sobs became a torrent, echoing the storm raging beyond the hull. Tears fell freely, warm and golden. Hisoka wanted to bring her warmth and safety but did not know how. Then, warm light poured from Asuka’s eyes and flooded the boat. She grew hot in his arms and blinding light surrounded them both.

He could no longer see, so he called out to her. “Asuka!”

All he heard was a pounding heartbeat and a steaming hiss that drowned out all other noise. He could no longer feel the hull beneath his feet, or the motion of the waves. He floated, suspended in air thick as smoke. “Asuka!” he cried again.

The bright white light began to fade to gold. Hisoka blinked and rubbed his eyes. The faint shape of Asuka stood in front of him and he reached for her. The flesh of her arm was textured like scales, smooth, and hot.

The salon faded into view and he once again felt the rocking of the boat, but this time it was gentle and rhythmic, how he remembered it as a kid sailing on an old fishing boat with his father. That was before the oceans could no longer sustain life and maintain Earth’s climate.

Hisoka felt as if he had just awakened from a dream. He studied Asuka, steam rising and swirling around her. Her body radiated intense heat and her smile burned. She led him to the deck where the light of the sky shimmered on her skin. Outside they found a scene of extraordinary beauty. A creature jumped alongside the boat, stitching a pattern into the surface of the water. A mountain towered in the distance. But it was not Mt. Fuji. The peak was too high and broad and golden. A large bird flew overhead, its swooping neck turned to study him. Hisoka exhaled his disbelief and found himself in a new world.

Click on the image above to enjoy more short stories by some awesome authors!