AtoZ Challenge - K is for Kelp

For the AtoZ Challenge, I will post an episode of flash fiction featuring an herb for the letter of the day for the month of April. The episodes are glimpses of a larger story. To read from the beginning:  A, B, C, D, E, F, G, H, I, J. 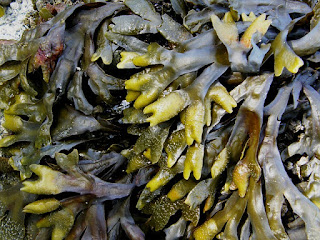 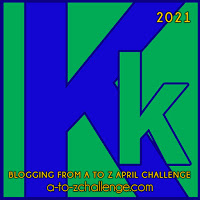 Sybil took Holly on another field trip to one of the unlabeled levels. This time Sybil showed her the lift connecting the levels. It was hidden and looked like a ventilation access panel.

Holly spent a lot of time with her eyebrows drawn close together and she was glad the headache remedies appeared to be helping. Reality was no longer as simple as she believed it to be.

The smell when the portal to their destination opened could only be described as pungent. It seemed unpleasant and the corners of her mouth turned down when she exhaled. Were they visiting an unwashed lavatory?

She walked along a curved wall and discovered the murky color was actually a liquid shifting behind a transparent barrier. Her hand pressed on the cold surface as she leaned closer. Deep green shapes wavered between streams of bubbles.

“Kelp,” Sybil said. “Fucus vesiculosus to be exact. I provide quite a bit of it in dried form to the nutrition controllers for use as a supplement and umami flavor enhancer.”

“And it grows in water?” Holly asked.

“Salt water specifically. Earth was covered in bountiful oceans of salt water. Before the acidity levels were too much for the kelp to handle at least.”

She continued. “Now we need it to keep iodine levels up and protect thyroid function. It also contains high magnesium, calcium, potassium, and chromium, plus folate.”

While Sybil spoke, the whirring sound of machinery vibrated in the distance. Sybil’s expression hardened and she turned toward the enormous tank in time to see a large mechanical arm swinging down with a load of kelp dangling from it’s claw.

Sybil said, “I’m afraid it is time for us to go already. We will need some of this, though.” She reached out and gathered the slimy green-brown plants into a metal container and placed it inside her basket. Her wrinkles betrayed a deep concern and her steps were faster than usual.

They took the lift straight to the living level and appeared in a corridor that Holly never knew had a lift. She could hear the echoes of commotion and detect a strange scent she did not recognize, but it was as strong as the scent from the saltwater tanks. Her throat clenched a little and her eyes began to burn.

Three figures wearing the unmistakable dark orange uniform of the controllers stood blocking their way. The padded panels on their chests rose and fell with each tempered breath. Holly quickly pressed herself against the wall and planted her eyes on the floor, but Sybil continued to walk forward and nearly ran into the human barrier.

They reached out their arms to stop her, but a few quick phrases and the controllers stepped aside. Sybil motioned for her to follow and Holly reluctantly obeyed.

Before the medical controllers arrived, Holly and Sybil were able to wrap the worst burns with their fresh kelp. Holly was glad they would finally be allowed to leave the scene when one of the controllers stopped them.

He said, “One of the men over there says you are responsible for the accelerant that caused the fire to spread.”

Holly instinctively shook her head even though she had no clue what he was talking about. What kind of accelerant? She glanced toward the group of people who were involved in the fire.

“Responsible?” Sybil asked. Her voice was firm but innocent. “I provide no such thing.”

“No, but you know who does,” the controller said.

“I know many people, but that does not make me responsible for what they do,” Sybil argued.

“You will need to come with us,” he said, “for questioning.”

Sybil quietly turned to her and handed over her basket. “They will need at least a week of herbal treatments for their respiration,” she said to Holly. Then she disappeared between the armored men, her figure dwarfed by theirs.