AtoZ Challenge - H is for Horsetail

For the AtoZ Challenge, I will post an episode of flash fiction featuring an herb for the letter of the day for the month of April. The episodes are glimpses of a larger story. To read from the beginning:  A, B, C, D, E, F, G. 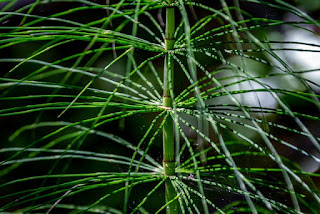 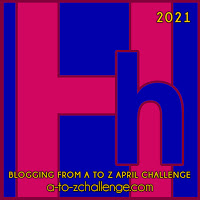 Holly woke each day with the thought of reporting Sybil’s mental state to the controllers. Her illegal activities were motivation enough, but her claim to be the ship’s AI made matters more complex. Perhaps she was mentally ill. It happened sometimes, especially with old age. A better course of action would be to learn as much as she could so when Sybil did finally leave her position, Holly could still help people with minor conditions and preventative health.
The two women walked slowly through the corridors of the living quarters. Holly was finally going to meet some of the individuals with chronic conditions Sybil taught her about. Another problem with age, especially considering the inactive life of simulation training and the sometimes variable gravity, was bone weakness. Sybil prepared several calcium-rich herbs in her basket and a fascinating herb called horsetail.
“Equisetum arvense,” Sybil said. She walked a few steps ahead of Holly, clutching the handle of her basket close to her side. “A very ancient plant, one of the oldest from the original human planet. It carries so much silica it could polish these floors. But that also makes it good for absorbing calcium and keeping arteries clear. I brought along some of the dandelion, too, to replace the potassium that might be lost using the horsetail. We will have to keep an eye on their kidneys, too, but you will see why we take the risk shortly.”
She stopped in front of a chamber door and tapped her knuckle against the frame. After a moment, the door slid to the side and a frail, older woman stood in front of them. She smiled at Sybil and shifted her eyes for a moment to examine Holly.
“My apprentice,” Sybil said. “I am showing her your mate’s condition today. I brought your greens for the week, too.”
She held the basket out for the woman to take and stepped through. Holly stood in the corner by the hatch and watched Sybil slide her knotted hands over the old man’s body. He was propped on the platform with several cushions and blankets and appeared perfectly comfortable, but it was clear he was suffering.
Holly did not ask any questions and stayed out of the way except when Sybil asked her to boil water or bring her a vial. When they left the chamber, she could not hold it in any longer.
“Why are we helping them? They need serious help. Can’t the medic controllers care for them?” she asked.
“No, they have been left for die-off,” Sybil said.
“For What?” Holly stopped in her stride, forcing Sybil to turn around.
“They allow those who are too weak, who are a drain on the system to die off—not to waste resources on them. That is why I do what I do. To keep them around, to add diversity and history to the population.”
“You are saying the controllers stop helping people who are suffering?” Holly asked.
“No, I am saying the controllers stop helping people who want to keep suffering.”
“Who wants to keep suffering?” Holly was having trouble controlling her voice.
“Suffering is part of life,” Sybil said. Her voice always remained calm and even. “If you want to stop the suffering, you have to stop the life. The controllers consider these individuals to be done with their life and resources will no longer be allotted to keep them comfortable. But I have found, these individuals are in fact closest to their humanity in these last moments, and I want to preserve who they are. I learn from them and they are grateful for the extra time.”
The old couple did seem grateful, but Holly still struggled with accepting Sybil’s version of reality. Was it true? Was this fate waiting for all those individuals who did their duty and followed the rules?
“What do they do all day? Since they do not report to simulation,” Holly asked.
“They act human.”
Posted by Steph W. at 5:00 AM