Fifteen years ago today, I sat across the table from a guy who was way too skinny and way too tall. We were at a small, local pizza place in Maumelle, Arkansas.

The server approaches and asks for our order and the guy says, "Could you put 'buh-non-nuh' on the pizza? Like a Caribbean pizza?"

The server looks clueless and glances at me. "He is asking if you offer banana as a topping," I translate. She laughs, we order pineapple on his half and continue our meal. Clearly, all the signs pointed to this guy being a completely bizarre friend who would provide me with plenty of amusing moments. (Even if he did eat pineapple on his pizza.)

When the check is brought to our table, he slides it closer to himself and says, "If I pay, then I get to call this a date."

Really? Is that how it worked? A few months earlier, I met the guy while he was on a date with my best friend. I was still semi-engaged to my high school sweetheart and going to college. I just returned from studying abroad in France and had so many ideas about how I wanted my family to be.

Less than a month after I met him, though, my quasi-fiance walked, I could not sleep at night or eat anything, and overnight, all my friends were too concerned with picking a side that they ignored me completely.

But then I met this guy again. I swore he grew another five inches taller and his accent was even harder to understand, but I clearly understood him when he asked if I was gay. "You seem to hate men," he said. "And you are wearing a commie hat." He was referring to my short-brimmed cap that maybe looked a bit like something Castro wore. I laughed and went to get my sunglasses out of my car. We were at a park near a "mountain." At least that is what people in Arkansas call it.

"You drive a manual?!" he asked. We exchanged phone numbers and I was put in the Nokia bar phone as "Manual Mustang Girl."

The following week, he and my best friend came up with a plan to find me a good boyfriend. I am not sure why. I had my own apartment. I was doing great in school. I had plans to go to grad school anywhere else. But I went along with it. No taller than 5' 10", spiritual or at least open-minded, college or trade required, likes to do outdoor things, knows about cars, appreciates my art and cooking...I don't even remember the rest.

Since this guy was "not from 'round here," and in circles I was not, he agreed to keep an eye out.

Then late one night, I got a text. A text! Those things cost money! I didn't pay for those. So I called him. "You know I don't want to pay for messages, just call me, I have plenty of minutes. No one else calls and my mom is in my circle."

We talked for about an hour, it was the middle of the night. Then he said he rented some Monty Python DVD's from the Movie Gallery where he worked. I had not seen those in ages. "I'll come over," I said.

Before I knew it, we were movie buddies. He got a discount on rentals, and I love anime, and we talked on the phone when I couldn't sleep. He promised to make me a cake. He made jokes about fitting every description on my list.

"That is only one thing. I really like doing stuff outdoors and I don't know anything fun to do here. There is no beach. I grew up in Cape Town, beside an actual mountain between two whole oceans!"

"There's a lake? See, I need someone to show me around. A local."

"Well, I will make a cake tonight, but let's go get pizza first. Can't have any pudding if you don't eat your pizza."

"I thought you said cake."

"That does not make sense."

And that is how he ruined my visual image of a bunch of British children trying to take chocolate pudding without eating their meat.

So we went for that pizza. Fifteen years ago. What a friendship! Married eleven years, two kids, and many adventures behind us and ahead. I don't even mind the pineapple on my pizza, as long as it is gluten-free. Plus, we finally live closer to an ocean and visit it almost every weekend. 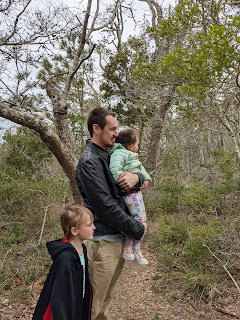