I want to use this winter solstice to shine some light on one of the greatest authors of all time and to explain why a moral message even matters in a story.

First of all, Blessed Yule to the Northern Hemisphere. A celebration of the sun standing still. A time when the nights are the longest for inhabitants in the northern half of our beautiful world. One of my favorite stories to enjoy this time of year is Hogfather by Terry Pratchett. I am very embarrassed to say that I have not read the book (yet) but have seen the film multiple times. I wanted to be thorough in my understanding of the book and its superb universe, so I decided before reading this particular book I needed to read the ones that came before. I asked a friend for advice because there was not enough time to read ALL of the books from Discworld, so he recommended I follow the subseries that focuses on Death. This was awesome advice, because these turned out to be my favorite. Unfortunately, I got stuck in Soul Music, the third in the Death Books. I don't know why, perhaps it was lack of time, but I never finished it. Ironically, if I every finish it and read Hogfather, the final book will be Thief of Time. I believe this is a story about my life and how it has been impacted by external forces that seek to control me. Just a theory...

I was watching Hogfather last night and Death looks down at his granddaughter, Susan, and issues the moral message. She is trying to determine why Death went through so much trouble to keep the Hogfather alive. Why was it so important that everyone believe he was real? How could a fat boar in a red fur suit who visits one night per year and exchanges free gifts for a glass of sherry and a pork pie be real?

Then Death tells her. If no one believed, then the sun would not come up tomorrow. Instead it would be a giant burning ball of gas. He explained that if we did not allow humans to believe the little lies, then we would not believe in the big important ones that come later. He was referring to justice, liberty, freedom, etc. The dialogue here is so important to the story. In my opinion, it gave the viewer (reader) a purpose for reading the book, besides entertainment. It makes readers think. Is he right? Are these things lies? Would the world still exist if we did not believe in them?

I have been chewing on these thoughts all night and day. I would say that justice is probably the biggest lie we tell ourselves in this country. But at the same time, if we did not believe it was possible, the alternative would be unimaginable.

Terry Pratchett knew how to write the most humorous and enjoyable stories about a completely fantastic world. And he also knew how to hide the deepest philosophical thoughts inside them. Or perhaps he was not intending to hide them at all.

As a thief has once again stolen my time, maybe you know the answer to this question. Did Pratchett want his readers to know he did this? Have you read something about him? Tell me in the comments. 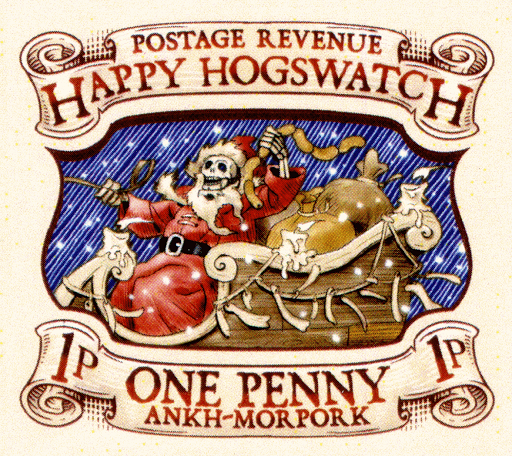