I have been free-writing for the past couple of weeks. I decided to just follow wherever the characters would take me. It was very productive and I have completed over 200 pages but it just wasn't feeling right. So I decided today, I would map my story so far and make a list of holes that would need to be filled in. This is what I found... 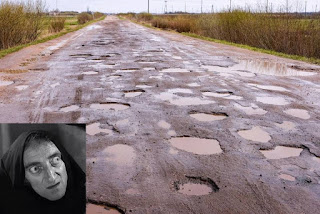 But I realize that this is a phase in the writing process. I am creating something new, I am sewing together a story from a scrap drawer called my imagination. I know the basic themes, I know the main inciting incidents and dramatic questions, and I know my characters and how they fit in the broad galaxy of my story. My task now is to use only words to invite others into that galaxy. My goal is to give readers a chance to materialize in a different realm and feel what it is like to be somewhere else.

This is the hardest part of sharing what I create. I have to not only record what I see, feel, and think in this new realm, but I have to make sure my readers understand those sights, feelings, and thoughts as well. What may be a perfect connection in my mind, may be hidden to someone else. And sometimes, because I have the whole picture in my head already, I can forget that a reader can only see what I show them.

Try this. Think about your car. Picture the whole thing. Now say out loud what you would say to describe it to someone who had never seen it. I'm guessing you mentioned the color and the type of vehicle, and perhaps a few other details. Did you mention that the tires were black? Or did you assume they already knew that? What about the setup of the dash? Did you explain what the tachometer does? Did you mention the color of the numbers on the clock? Or describe how the starter motor sounds? How about windshield wipers? Those are pretty important to how cars function during specific weather, and if the person had never seen a car, they might not know about those, or even a windshield for that matter. That is my point.

So while mapping my work so far (at least the first half), I have identified seven holes that need filling in order to give my readers a clearer understanding. These aren't mistakes, they are simply things that naturally get filled as the story unfolds over time, and sometimes after writing hundreds of pages, you can forget what you were supposed to do.

To be honest, I love this. It is like putting together a 1000 piece puzzle but someone else has the box and they are only giving me ten pieces at a time.

Blucher! (Which by the way does not mean glue or sound anything like the German word for glue. It is just a surname. Those horses were just responding in dramatic irony to the name of the villain the viewers didn't know about yet. -See, if the writer doesn't explain something, then the audience doesn't get it, or just makes something up!)
Posted by Steph W. at 12:52 PM